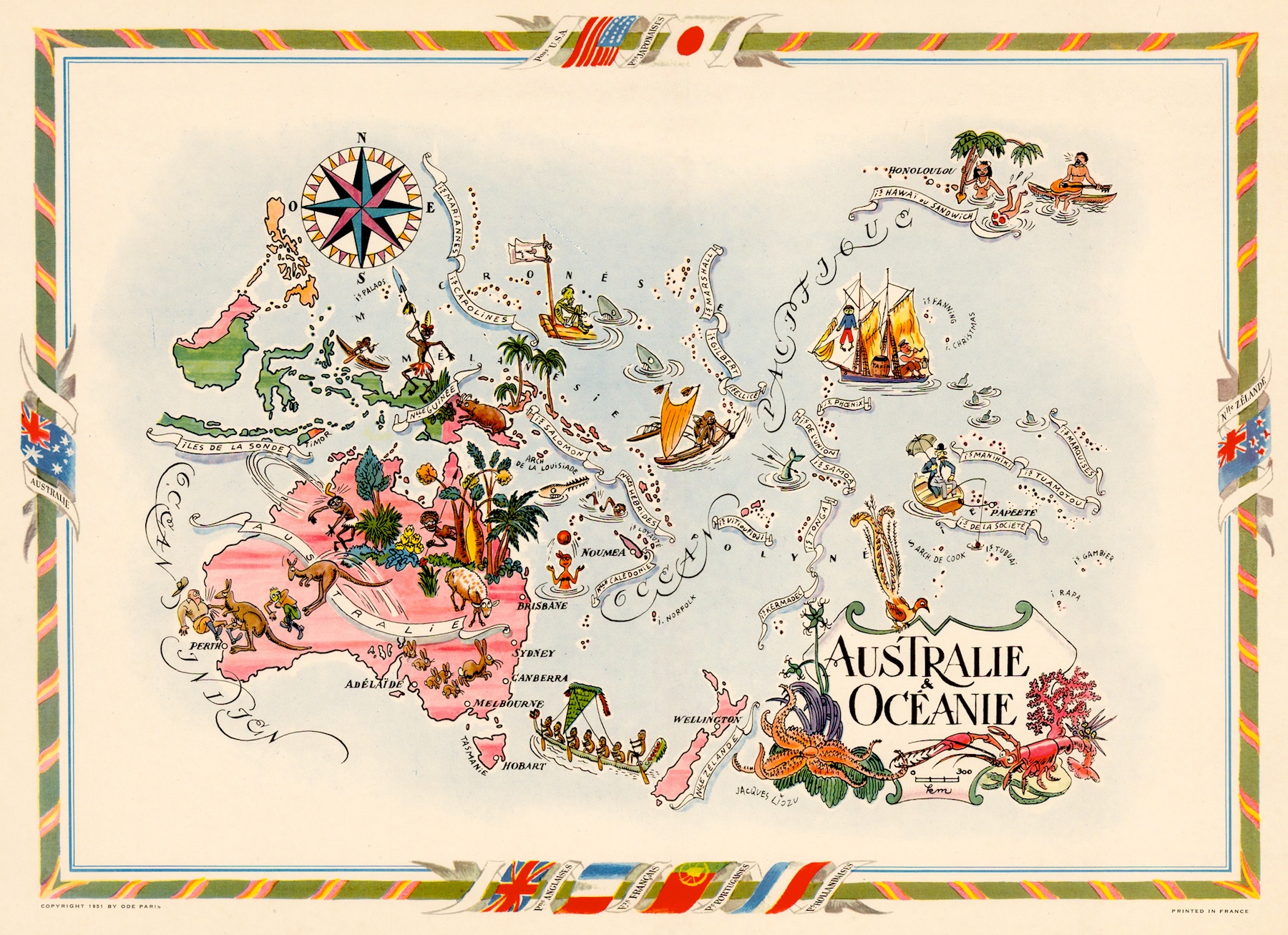 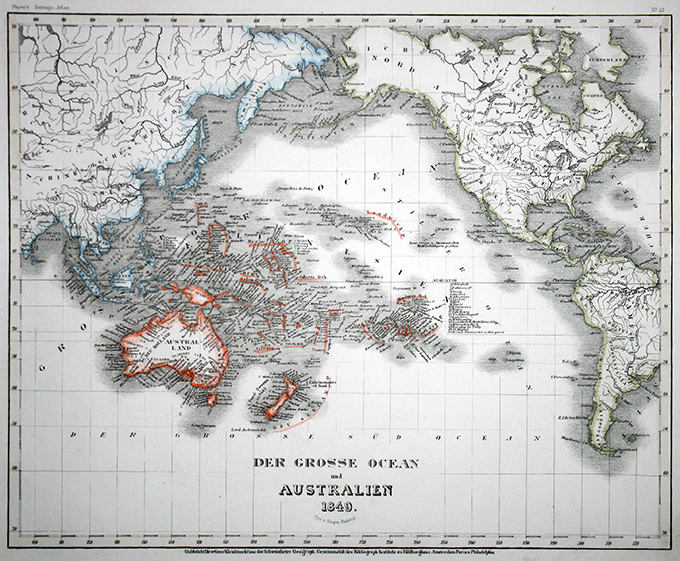 Lovely engraved map based on the cartography by C. Franz Radefeld (1788-1874) showing in high detail the Pacific Ocean. From the “Meyer’s Neuester Zeitungs Atlas” published by Bibliographischen Instituts in Hildburghausen in 1849-52. The innovation of this work is that almost all maps had small inserts showing richly detailed maps of major cities and their surrunding areas: so not only could travellers carry the atlas with them easily, they could also obtain an initial orientation to their desti 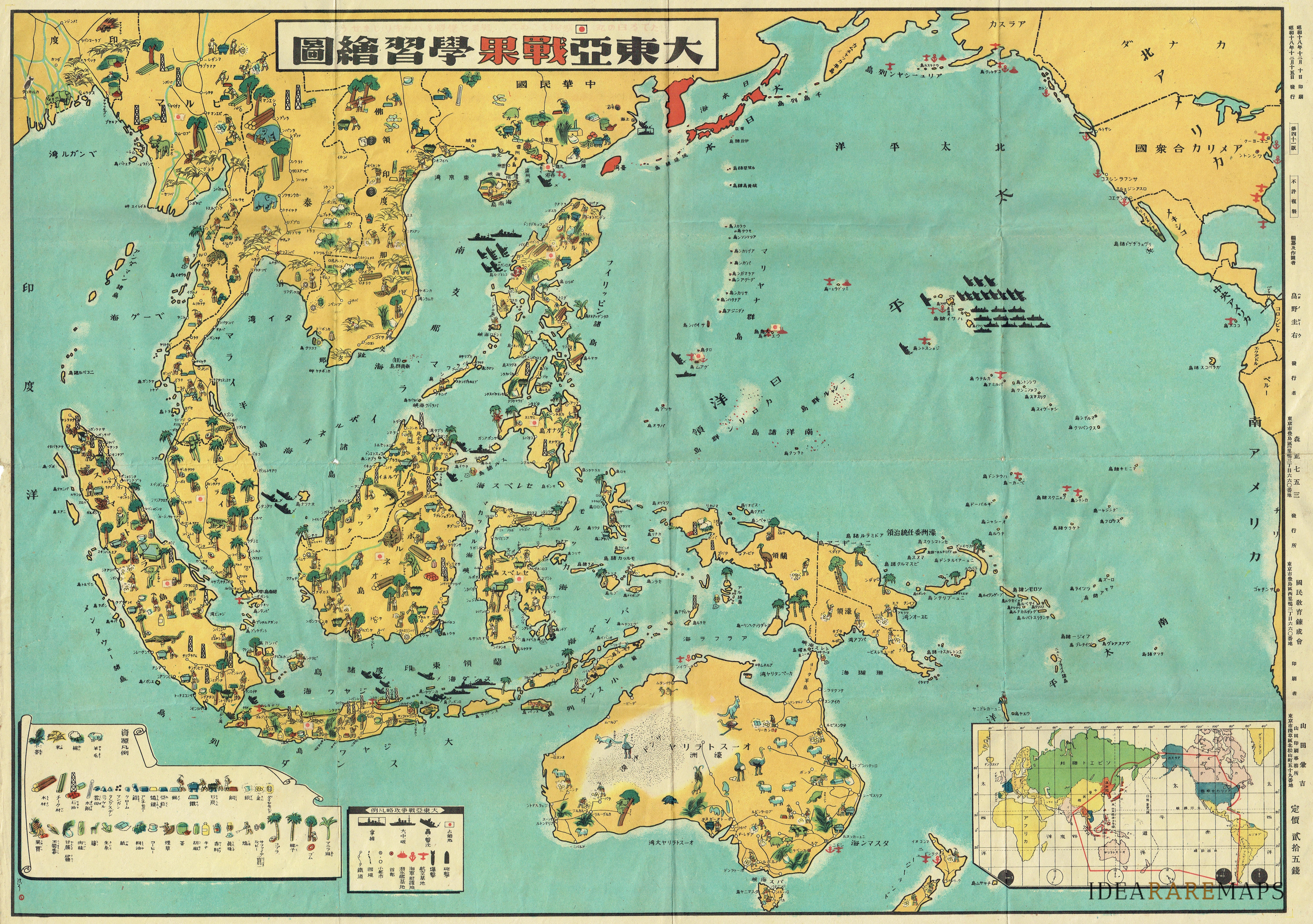 Interesting pictorial map of Southeast Asia, Oceania, Australia, and the Pacific published by Keiu Hatano in 1944. Centered on Philippines, Indonesia, and Papua New Guinea the map extends to Alaska and the entire eastern coasts of the Americas. Below there are two inserts explaining the several vignettes on the map; One of the keys pertains to war and includes symbols representing naval and air force bases, active and sunken ships. Not included within these keys… 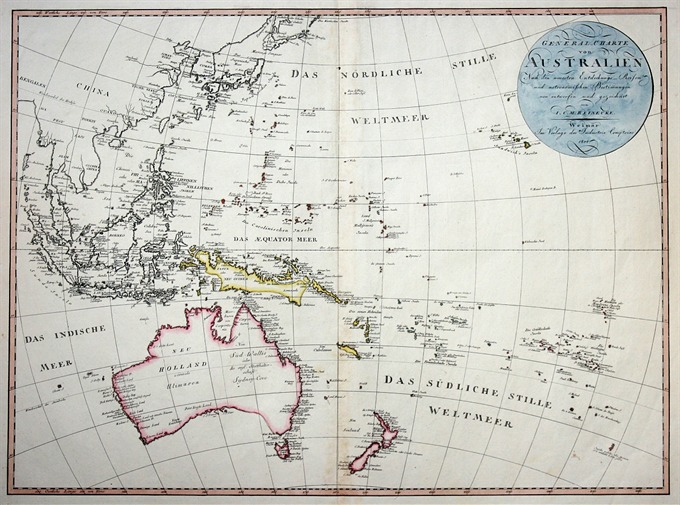 Map of Australia and New Zealand, with Southeast Asia, Japan and islands in the Pacific Ocean. Title cartouche at upper right. Published by the “Geographisches Institut” in Weimar in 1801. [cod.1087/15] 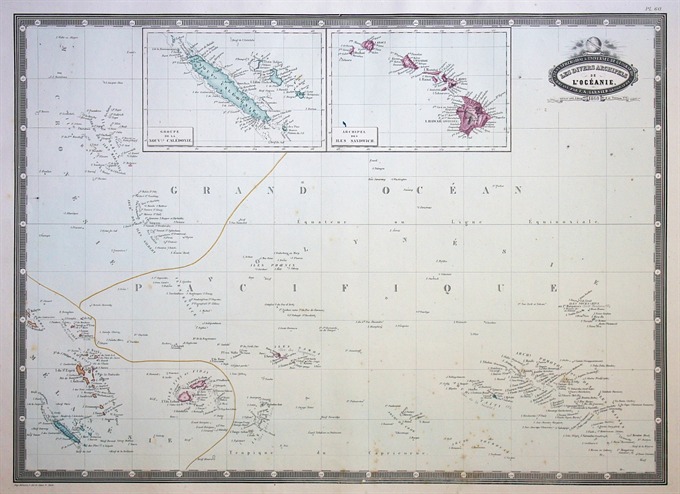 Very detailed map of the Pacific Ocean with insets of Hawaii and New Caledonia. From Atlas Spheroidal et Universel de Geographie by M.F.A. Garnier published in Paris at Veuve Jules Renouard in 1862. This atlas is exceptional for its “spheroidal” maps of the globe, showing the various continents and poles, shaded to give the effect of a sphere floating in space. [cod.1091/15] 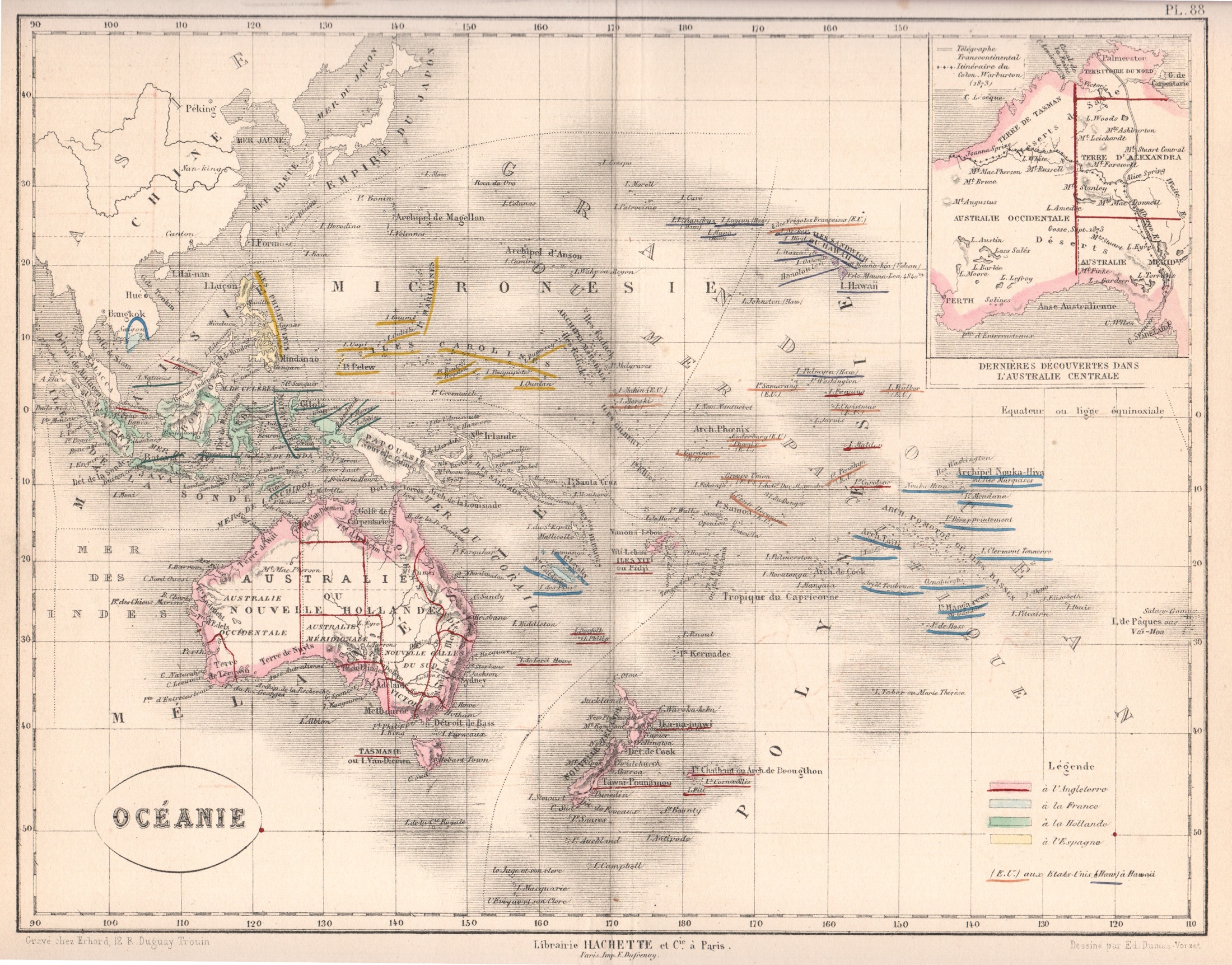 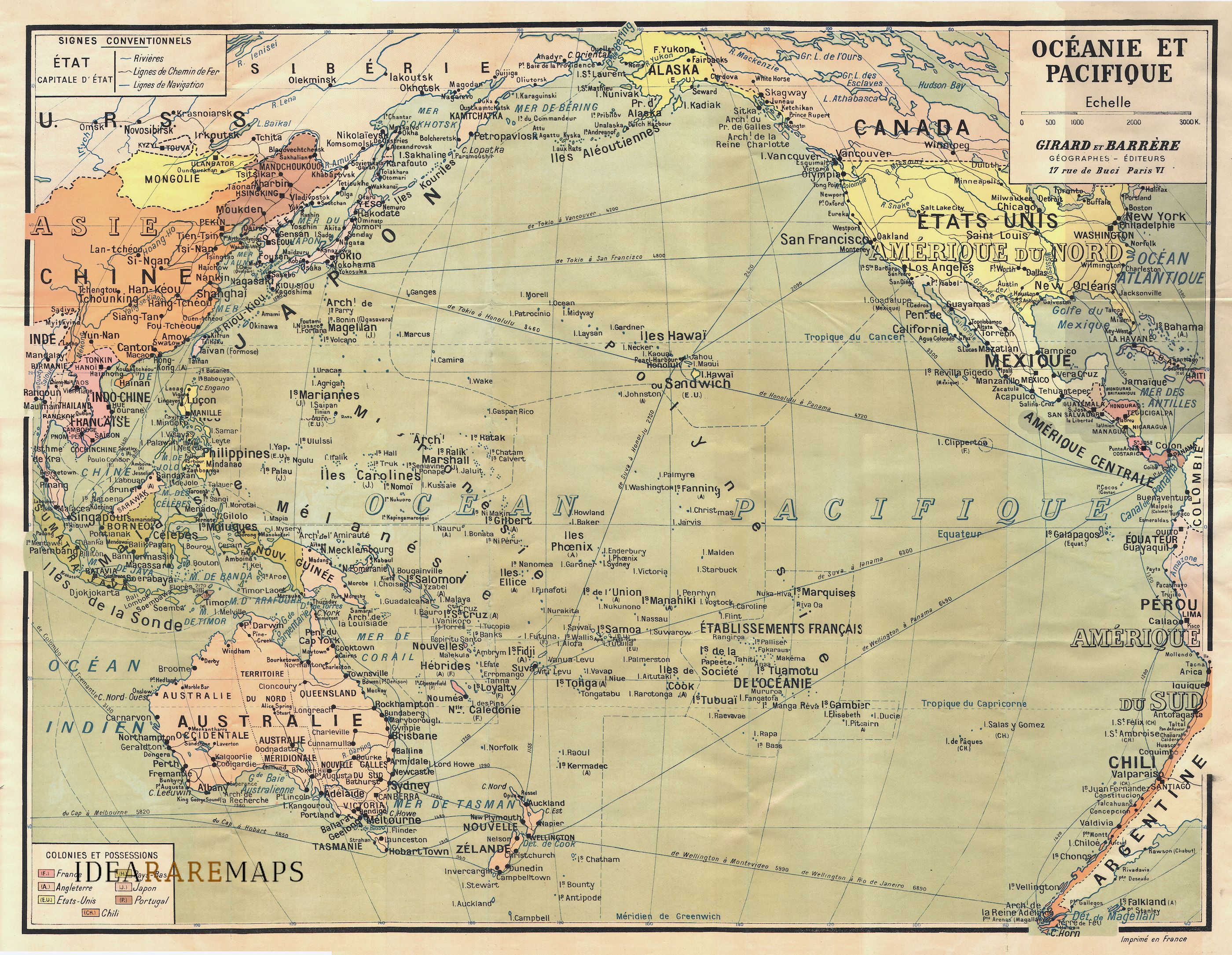 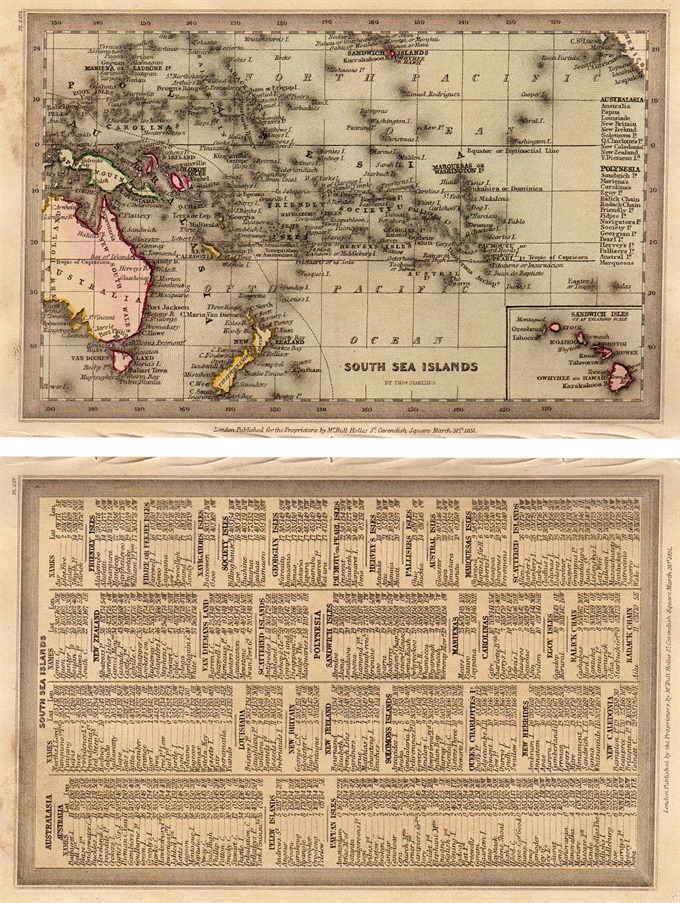 South Sea Islands by Tho. Starling

An attractive and really uncommon miniature map of the Pacific Islands with an inset of Hawaii. From popular Starling’s Victorian atlas “The Royal Cabinet Atlas, And Universal Compendium Of All Places In The Known World” published by Bull and Churton in London in 1833. The map is accompanied by a page of text giving the latitude and longitude of the major towns.