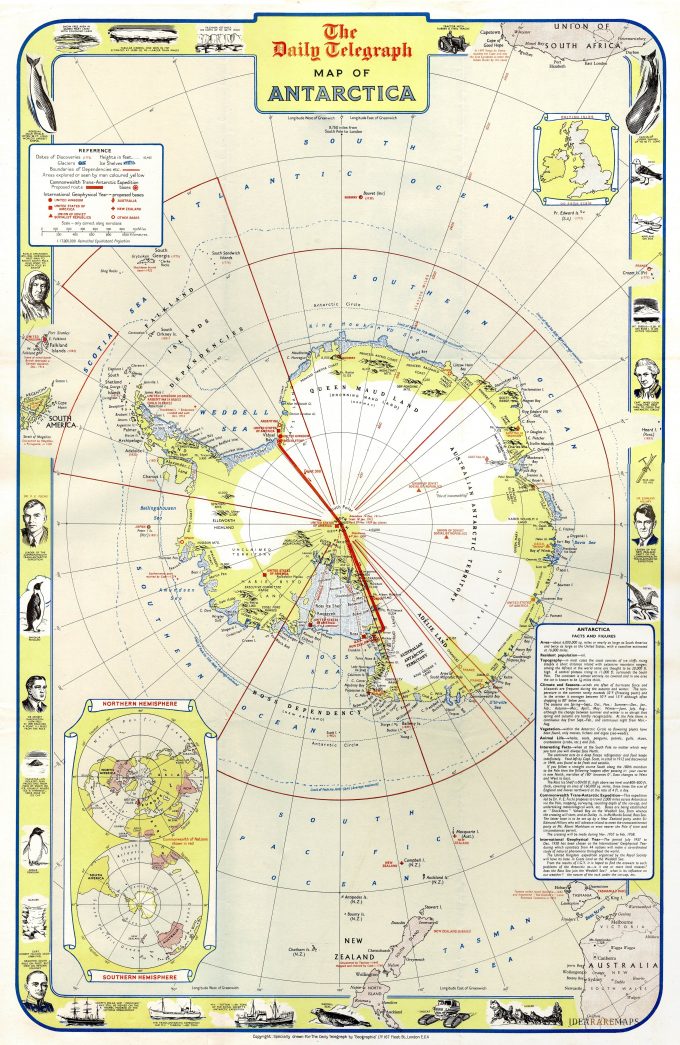 The Daily Telegraph Map of Antarctica

Interesting folding map of Antarctica, one of the most decorative maps published as part of the celebration of the International Geophysical Year (July 1957-December 1958). It shows the whole continent with the natural features drawn in blue and the international bases drawn in red. The decorative pictorial border shows key explorers such as Amundsen, Scott and Shackleton, fundamental equipment for exploration, some of the ships used by various explorers and animals found in and around the Antarctic. Written in red by the South Pole are the three expeditions the made it, Amundsen on 14th December 1911, Scott on 18th January 1912 and Byrd on 29th November 1929 (by plane). The route of the Commonwealth Trans-Antarctic Expedition (led by Dr. V.E. Fuchs and Sir Edmund Hillary) is drawn in thick red line from Vahsel Bay at the edge of the Filchner Ice Shelf to Dailey Island in McMurdo Sound, Ross Sea. The map has a reference table in the upper left-hand corner and a facts and figures table in the lower right-hand corner. The latter mentions the area, topography, climate and seasons, vegetation, animal life and interesting facts. In the lower left-hand corner is an inset map showing the Northern and Southern Hemispheres and in the upper right-hand corner one of the British Isles on the same scale as that of the Antarctic. Each land or island in the periphery of the map, New Zealand, Tasmania, the Magellan Strait, the Falkland Islands and South Africa have a discovery note written in red. Designed by “Geographia Ltd.” the firm founded in 1911 by the Hungarian Alexander Gross (1879-1958) specialized in cartography items and published by The Daily Telegraph in London, 1957.