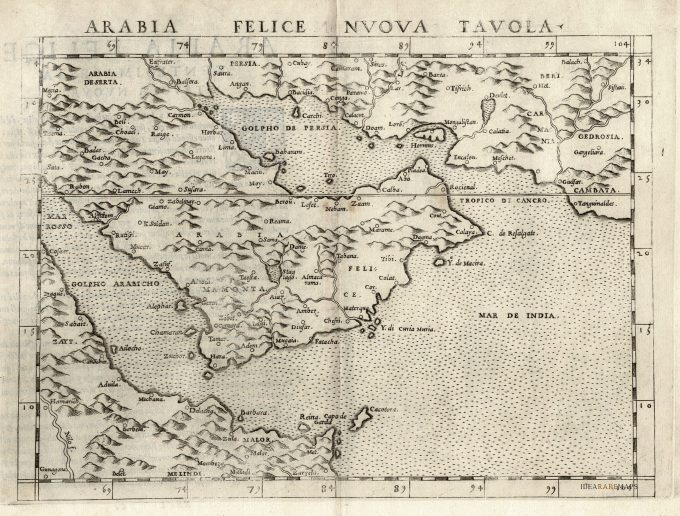 The fine map of the Arabian Peninsula showing Yemen, Oman, Bahrein, Qatar, Kuwait and Saudi Arabia from the first edition of Geographia di Claudio Tolomeo by Girolamo Ruscelli published in Venice in 1561 at Valgrisi. There is a really interesting Italian text on verso that describes the early history and geography of the area. A feature of this first state is that some maps haven’t the platemark at top because two maps were engraved on the same plate and the resulting sheet halved. Ruscelli’s Atlas is an expanded edition of Gastaldi’s Atlas of 1548, which has been called the most comprehensive atlas produced between Martin Waldseemuller’s Geographiae of 1513, and the Abraham Ortelius Theatrum of 1570. Gastaldi’s maps were beautifully engraved on copper, marking a turning point in the history of cartography. From then on the majority of cartographic works used this medium. As it was a harder material than wood it gave the engraver the ability to render more detail. Gastaldi sought the most up-to-date geographical information available, and [he] became one of the greatest cartographers of the sixteenth century.