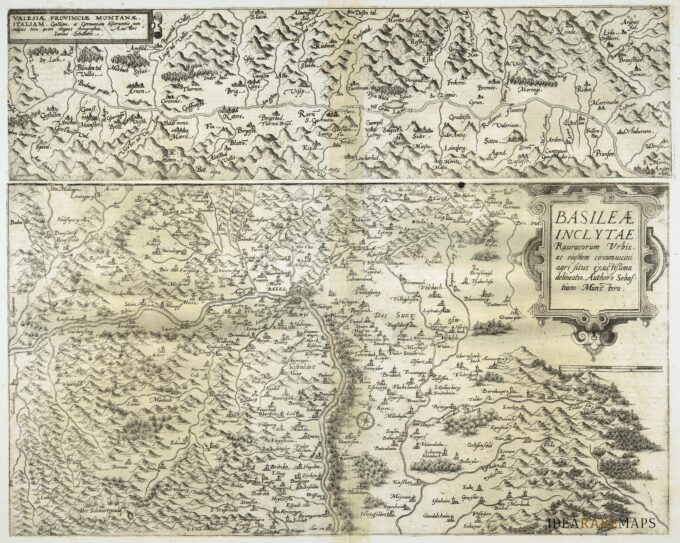 Important and rare two maps on one sheet showing the area of Basel and the Valais by Gerard De Jode. In 1578, Gerard De Jode published his atlas entitled Speculum Orbis Terrarum but due to the strong market presence of Ortelius’ Theatrum Orbis Terrarum, sold poorly. This map comes from the second and last edition of the atlas published in 1593 by Cornelis De Jode.

Cornelis de Jode (1568-1600) was the son of the mapmaker and publisher Gerard de Jode. The elder published several important maps including Ortelius’ famous 8-sheet map of the world in 1564. His major atlas, Speculum Orbis Terrarum was a commercial failure because his rival, Abraham Ortelius, was able to obtain a monopoly for eight years at the same time De Jode was preparing the publication. After Gerard’s death, his widow and son enlarged the atlas and re-issue it in 1593. On the death of Cornelis, the copper plates were sold to J. B. Vrients, who acquired them merely to stop their re-issue, as he had also acquired the Ortelius plates.