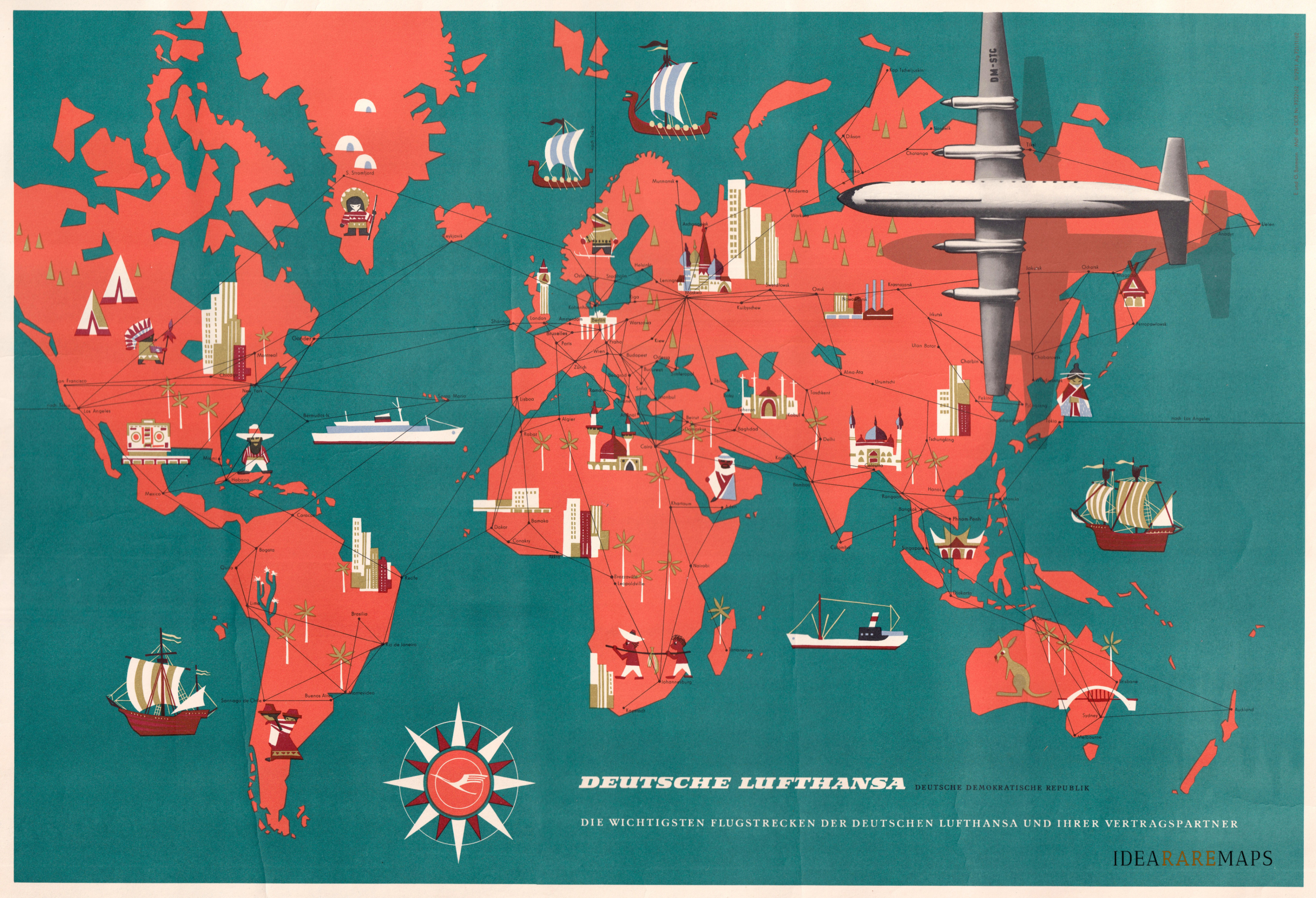 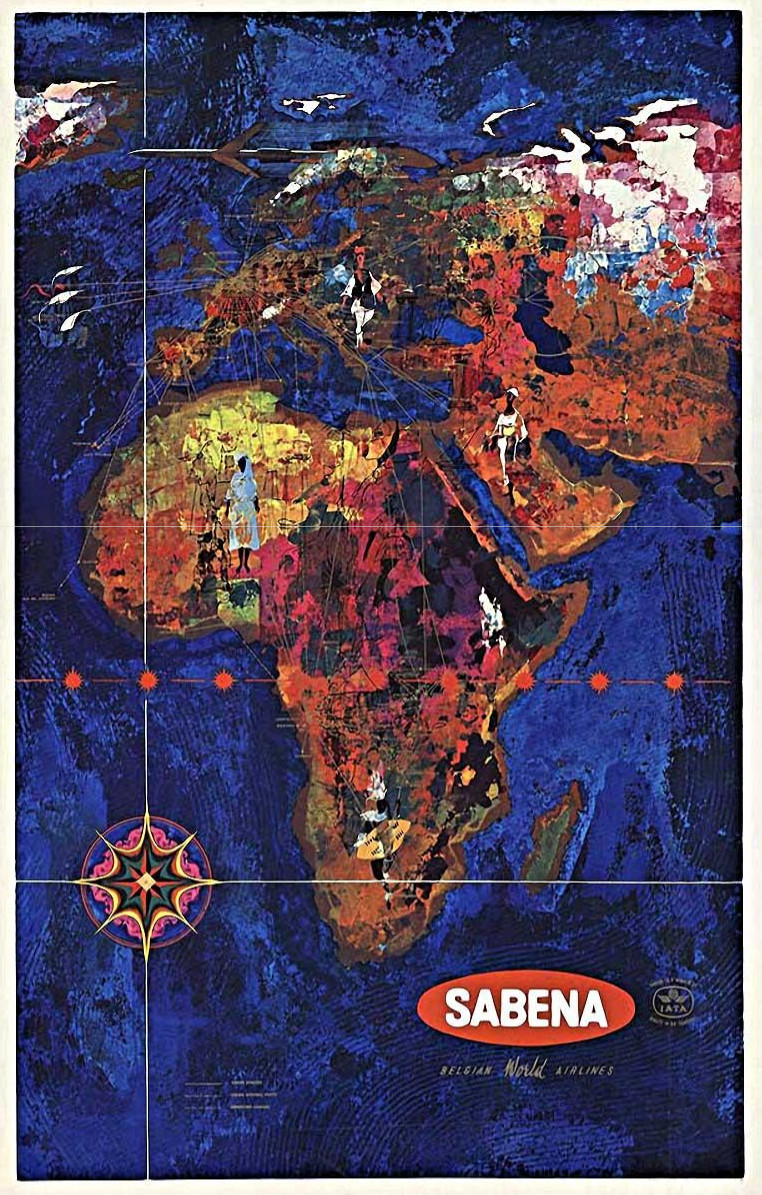 Striking map showing the routes of Sabena Airlines throughout Africa, the Middle East, and Europe created in beautiful color patterns with the oceans surrounding it in blue tones. The map features many of the cities printed in gold, as well as the flight patterns that connect them together. The routes delineated in the map show the two main hubs of Sabena to be Brussels with Leopoldville, capital of the Belgian Congo (now Kinshasa, Democratic Republic of the Congo) with a large number of other destinations around and between them. African tribal art is used in this image as part of the design as well as the regional representation of ethnic people. Published in Brussels by Marci in 1960. 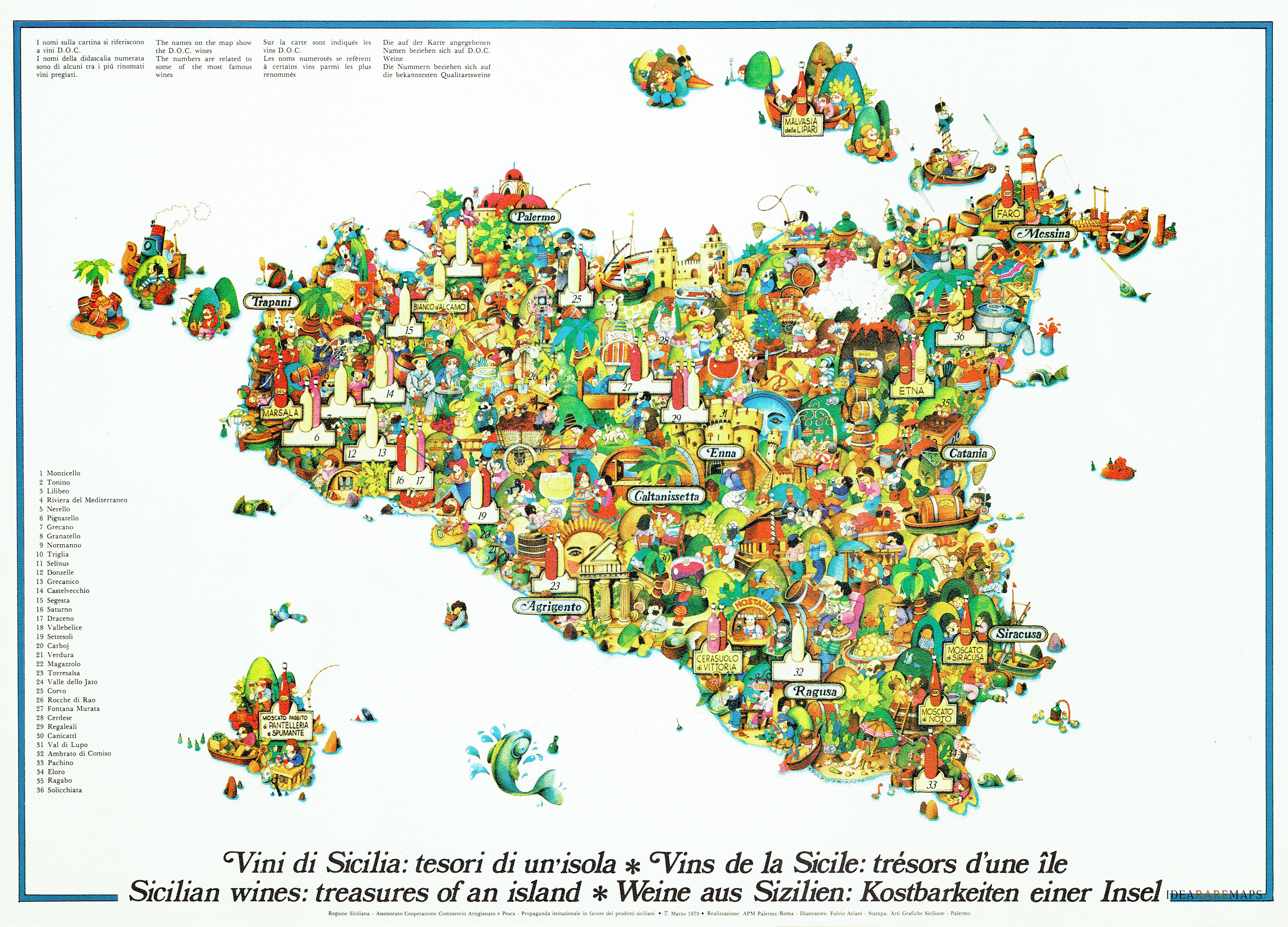 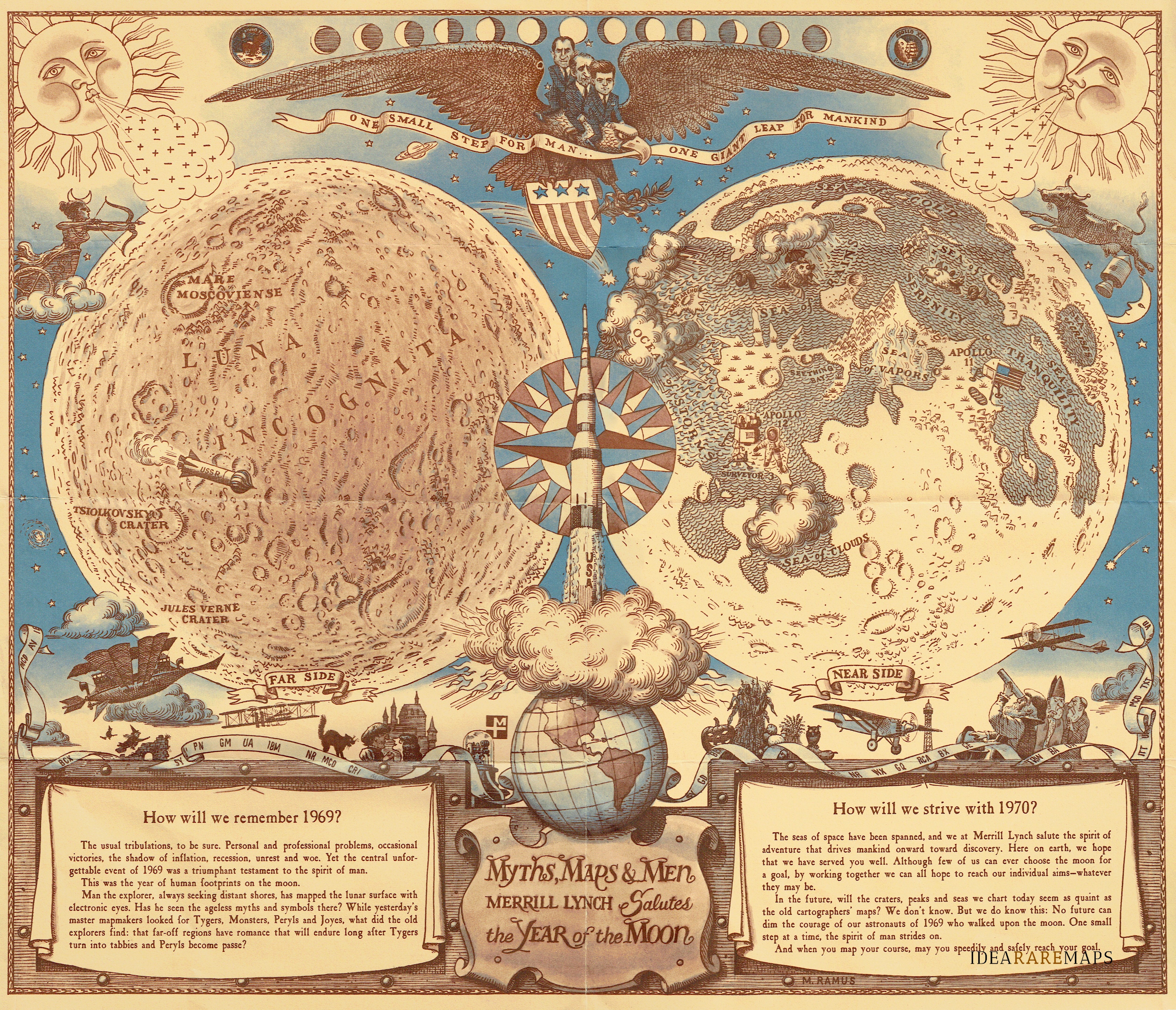 Richly decorated double hemisphere pictorial map of the moon by Michael Ramus issued by New York bank Merrill Lynch as a promotional hand-out to commemorate the first two manned lunar landings in 1969 on 20 July and 19 November, which were achieved by the Apollo 11 and 12 space missions. As the title implies, it combines accurately drawn and labeled maps of lunar craters and seas with whimsical illustrations. At the center is the Saturn V rocket, which launched the Apollo 11 astronauts Neil Armstrong, Buzz Aldrin, and Michael Collins into space. At top depiction of three American presidents – Nixon, Johnson, and Kennedy, whose administrations supported space exploration – soaring above the scene upon the back of a n eagle. From the eagle’s beak, a banner unfurls with astronaut Neil Armstrong’s famous phrase, “One small step for a man… one giant leap for mankind.”
The moon is shown in two hemispheres representing the “Far Side” and the “Near Side” with the Apollo 11 and 12 landings illustrated on the “Near Side,” and the “Far Side” making note of the Russian lunar missions. The hemispheres are rendered with accurate topography while the so-called “seas” are filled with mythical sea creatures. Below the hemispheres are illustrations of various achievements in astronomy and flight, including Galileo observing the moon with a telescope and the transatlantic flights of the Wright Brothers and Charles Lindberg, as well as eccentric images, such as Halloween imagery and Romeo and Juliet (likely a reference to Juliet asking Romeo to “swear not by the moon”). A stock ticker tape stretches across the image as a reminder of Merrill Lynch’s investment opportunities.
At bottom two cartouches describe how 1969 will be remembered and what is to be expected in 1970. One of the most interesting and famous Moon pictorial map. Ref: Hornsby (Picturing America) #158 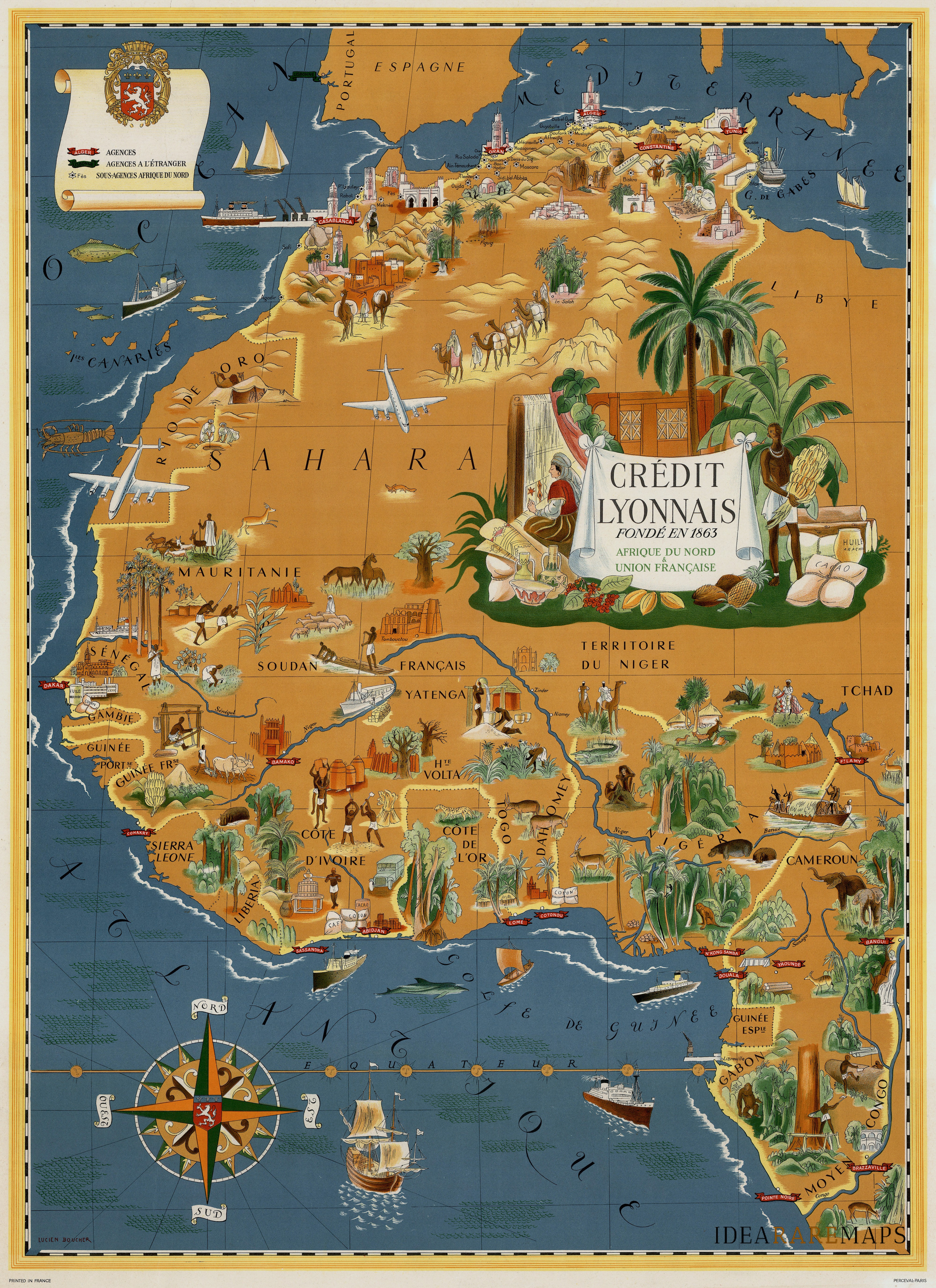 Decorative pictorial map of North-Western Africa by Lucien Boucher published by the French bank Crédit Lyonnais. Includes color coded list of agencies and coat of Arms on upper right corner. The lovely vignettes show major buildings and landmarks, parks, roads, cities and towns, etc. Credit Lyonnais, founded in 1863, can be regarded as the archetype of the banking modernization desired by Napoleon III. Title framed with decorative cartouche.
Design by Lucien Boucher who is a famous commercial poster artist and illustrator born in Chartres in 1889 and died in 1971. Graduated from the Ecole de céramiques de Sèvres, he began his career as cartoonist for the satiric newspaper Le Rire. In the 1920s he worked actively as poster designer for the movies and the advertising industry. He designed a significant number of lithography’s inspired by the surrealism style. He’s very well known of a series of posters (advertising & world map) designed for Air France