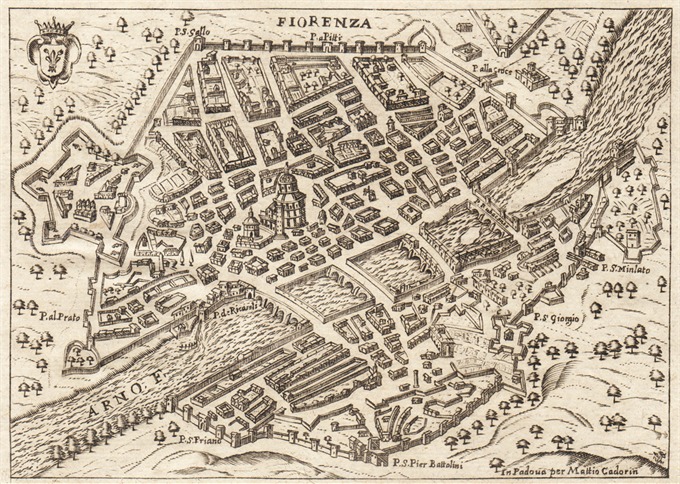 View of the town from “Itinerario overo decrittione de’ viaggi principali in Italia” by Francesco Scoto published in Padua by Matteo Cadorin in 1670. [cod.255/15] 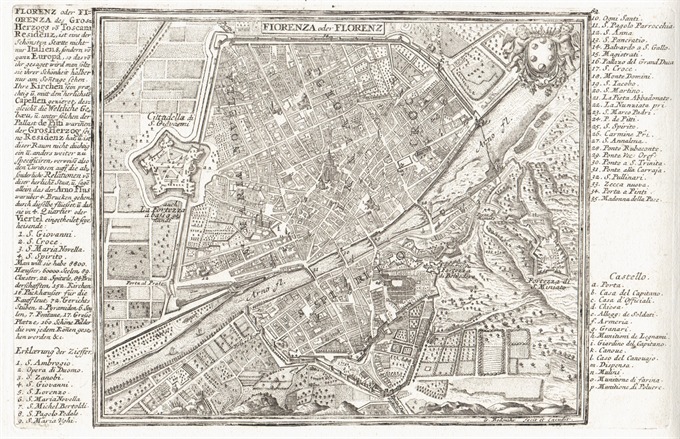 Beautifull town plan view of Florence at the left and right side with a text about the city. Published in Bodenehr’s Curioses Staats und Kriegs Theatrum. Gabriel Bodenehr (1664 – 1758) was a copper engraver and publisher. In 1716 he bought the copper plates of Johann Stridbeck (1640 – 1716), revised and completed them with his own maps, views and plans, and published them in several works with different titles. [cod.103/15] 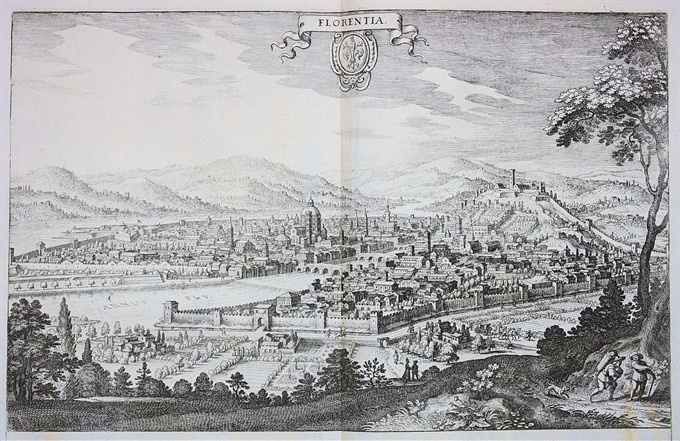 Decorative birds-eye view of Florence on the Arno River. A number of the major builidngs are clearly identifiable, including the Duomo in the center of town. Shows in nice detail buildings, churches, bridges, fortified walls of the city, and the surrounding hillside. Coat of arms and banner title. from Zeiller’s “Itinerarium Italia Nova Antiqua” published by Merian in Franckfurt in 1640. [cod.256/15]

Uncommon copper engraved panorama of Florence from Nova et Accurata Italiae Hoderniae Descriptio by Jodocus Hondius published in only one edition in Leiden by Bonaventura and A. Elsevir press in 1627. Jodocus Hondius the Elder (1563-1612), or Joost de Hondt, was one of the most prominent geographers and engravers of his time. His work did much to establish Amsterdam as the center of cartographic publishing in the seventeenth century. Born in Wakken but raised in Ghent, the young Jodocus worked as an engraver, instrument maker, and globe maker. 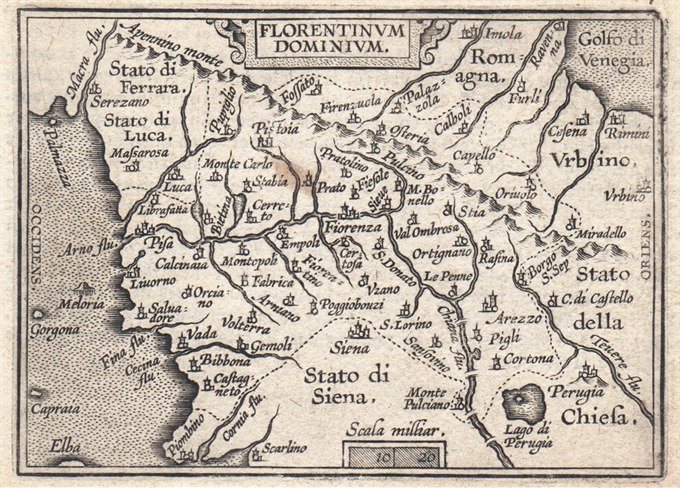 A fine miniature map from “Epitome du Theatre” published in Antwerp in 1598 with french text on verso. The engraver was P. Galle. [cod.257/15] 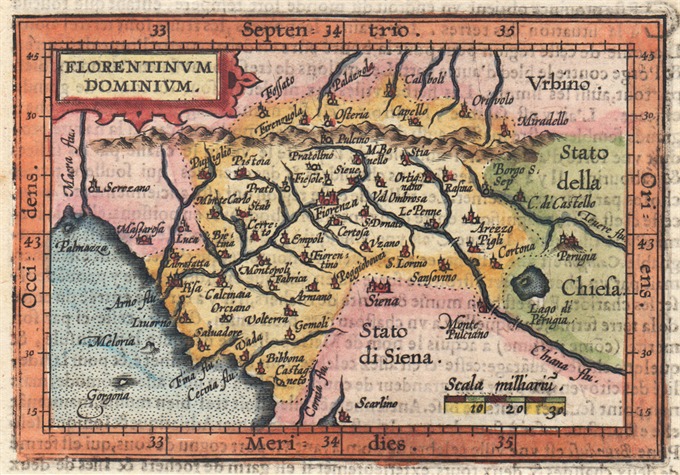 A fine miniature map from “Epitome Theatri Orbis Terraum” published in Amsterdam in 1602.The maps were based from those in P. Galle’s final edition of 1598 but were drawn and engraved with great care. They may be easily recognised as they have a wide border with latitude and longitude shown. [cod.259/15] 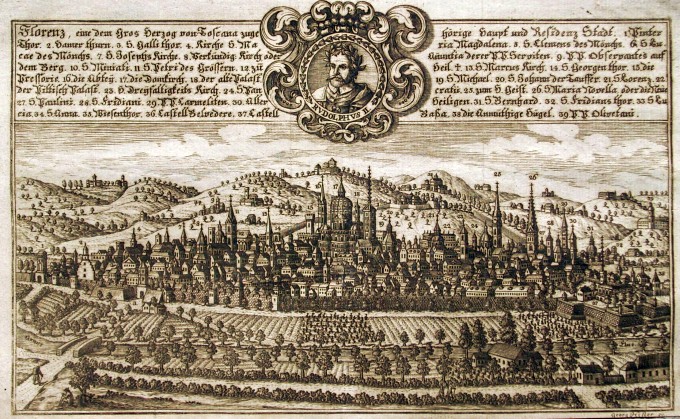 View of the town taken from Sachsischer Postillon and engraved on copper in german style by Hisler. Published in Wien in 1784. Very Rare. [cod.260/15]

Very fine panorama of Florence from “Curioses Staats-Kriegstheatrum in Bayern, Franken, Hispanien, Italien” published in Amburg in 1702 by J. Stridbeck and his son J. Stridbeck Junior.

Uncommon regional map showing Tuscany after the third independence war so with the new name of “Toscana” without the ancient title of “Gran Ducato”. The map was finely engraved by Pietro Allodi after a drawn by Filippo Naymiller. From Atlante di geografia universale: cronologico, storico, statistico e letterario. Milan, 1860 at Tipografia Pagnoni. Includes a second sheet of text providing really interesting geographical and statistical information on Florence and the other cities of the Italian region. 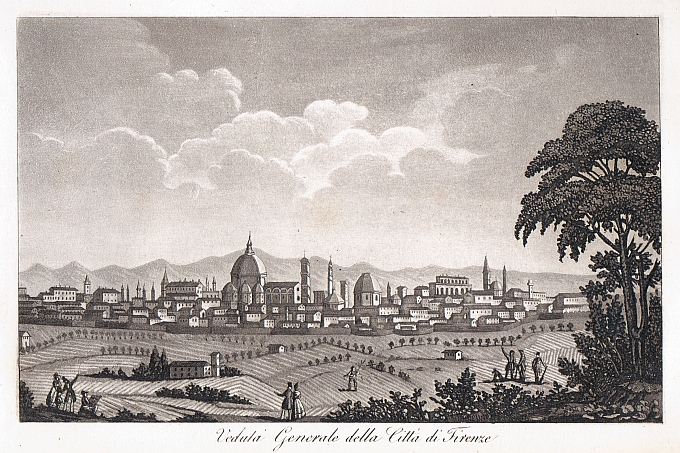 A very attractive “vue d’optique” of Holy Trinity Bridge in Florence. taken from Ponte Vecchio. This unusual kind of print was designed to be looked in a peep box which made the prints seem to be in three dimensions. Published in Paris at Daumont in 1780 ca.