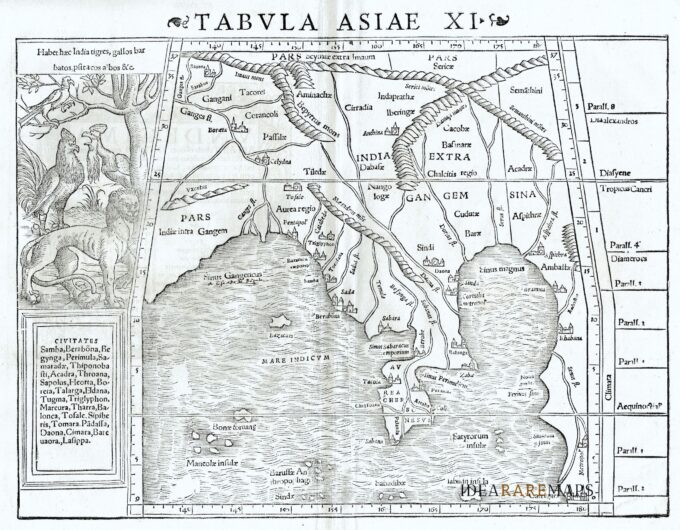 Woodcut from Geographia Universalis by S. Munster published by H. Petri. Excellent example of Munster’s map of the Indian Ocean and contiguous regions, extending from Southeast Asia to the Ganges River and north to the Himalayas.

Important early woodblock map extending from Southeast Asia to the Ganges River and north to the Himalayas with inset panel of tiger, cockerels and parrot.
Based on Claudius Ptolemy the map shows “India beyond the Ganges,” then a near-mythical region reputed to be a source of gold. Beyond the peninsula lies a huge bay – the Sinus Magnus – which was the supposed body of water bounded by the lands that were thought to extend from China, around the Indian Ocean, and connect with Africa. The decorative text’s border on verso is attributed to Hans Holbein.
From the rare “Geographia Universalis, Vetus et Nova, complectens Claidii Prolemaei Alexandrini enarrationis libros VIII” published in Basel at Heinrich Petri in 1552.
Munster’s Geographia was a cartographic landmark, including not only Ptolemaic maps, but also a number of landmark modern maps, including the first separate maps of the 4 continents, the first map of England and the earliest obtainable map of Scandinavia.