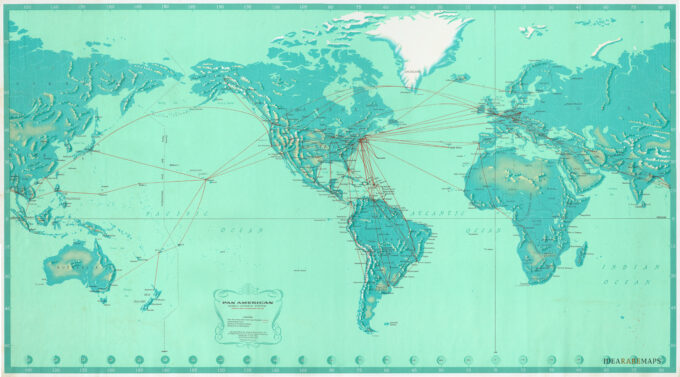 Striking route map of the World designed by John Philip, published in New York by Pan American Airlines, as a promotional item. Shows all the routes around the world to which Pan Am flew in 1959, including connecting lines and Pan Am’s own lines. Art by Casanova Associated.

Pan American World Airways, commonly known as Pan Am, was the principal and largest international air carrier and unofficial overseas flag carrier of the United States from 1927 until the airline’s collapse on December 4, 1991. Pan Am is credited for many innovations that shaped the international airline industry, including the widespread use of jet aircraft, jumbo jets, and computerized reservation systems. Identified by its blue globe logo (“The Blue Meatball”), the use of the word “Clipper” in its aircraft names and call signs, and the white uniform caps of its pilots, the airline was a cultural icon of the 20th century.